Elers, S., & Elers, P. (2013). He aha tenei? A content analysis of Maori representation on the New Zealand Police homepage. Australasian Policing: A Journal of Professional Practice and Research, 5(2), 35-38.
Introduction
The use of websites and social media by police agencies are a valuable asset (Hess, Orthmann & Cho, 2012). Websites are an essential tool for police organisations and provide a range of useful services including details of emergency and non-emergency contact information, understanding laws, crime statistics among other things (Kasper, 2011). Police websites tend to fit the mould of Grunig and Hunt’s (1984) public information model pertaining to one-way dissemination of information. However, despite the classification of the public information model, an official website of a police organisation is essentially the online gateway to the organisation and thus needs to cater to the community it serves. This includes accommodating for ethnic minority groups and in particular, the indigenous people of the
policing jurisdiction.

The New Zealand Police (NZ Police) operate a dedicated website (www.police.govt.nz) in an official capacity which is a subdomain of
the New Zealand government website (www.govt.nz). As an agency of the New Zealand government, the NZ Police have obligations to
Maori under the Treaty of Waitangi, the founding document of New Zealand. According to the NZ Police (n.d.) “Police are committed to
being responsive to Maori as tangata whenua, recognising the Treaty of Waitangi as New Zealand’s founding document” (para. 1). However, despite stating their position to be committed to their obligations under the treaty, a visit to the NZ Police website identifies an anomaly.

The front page of a website is called the homepage (Viehland & Zhao, 2008). The homepage is unreservedly the most important page on a
website (Christensen, 2007) as it is the first page that website visitors see and is the portal to the website (Viehland & Zhao, 2008). A content analysis of the NZ Police homepage was undertaken by the authors of this paper. The content analysis identified nil use of Maori language or imagery within the homepage, apart from the Maori translation of NZ Police which is part of the logo. This paper will question the legitimacy of the NZ Police to refrain from using Maori language and imagery on their homepage despite the fact that around one in seven New Zealanders are Maori (Statistics New Zealand, 2012).

Maori and the Maori Language
Maori are of Polynesian descent and are the indigenous people, or original inhabitants, of New Zealand, having arrived at approximately
1000AD from eastern Polynesia (Durie, 2004). In 1769 Captain James Cook ‘discovered’ New Zealand, and the colonisation by the British
commenced which resulted in the signing of the Treaty of Waitangi in 1840. The colonial knowledge system was contemptuously deemed
by the colonisers as being superior to Maori knowledge (McLeod, 2002; Sheriff, 2010). Thus generations of Maori students were beaten
for speaking the Maori language at schools in a linguistic genocide which resulted in parents not speaking Maori to their children in order
to protect them (Ritchie, 2012).

The traditional Maori social structures and norms were removed which resulted in Maori culture and identity becoming blurred through
the processes of deculturation (Lai, 2010). This resulted in colonial aphasia; the loss or inability to speak one’s own language due to the processes of colonisation. According to Newton and Shearn (2010), the “Maori language is the vehicle for Maori cultural practices and
thought, enabling the manifestation of all aspects of the Maori world” (p. 7). While Durie (2006) posits that Maori are more likely to participate in society if they possess a secure cultural identity. It was not until 1987 that the Maori language became an official language of New Zealand through legislation (Romaine, 2002); namely section three of the Maori Language Act 1987. A new wave of cultural renaissance and empowerment has seen numerous strategies to revitalise the language from within Maoridom which has resulted in 40% of Maori in 2006 being able to understand or read the Maori language (Te Puni Kokiri, 2011).  According to Statistics New Zealand (2012), approximately one in seven New Zealanders are Maori.

Previous Study (2009)
The Human Rights Commission (HRC) is an independent Crown entity and is legislated under the Human Rights Act 1993, which
authorises its powers and functions (Ministry of Justice, 2009). In 2009 the HRC analysed 123 central and government websites in
New Zealand to measure Maori language content (Human Rights Commission [HRC], 2009). A summary of the findings essentially
found “that most have little or no Maori content and if they do, it is not accessible from the homepage” (HRC, 2009, para. 7). Then Race
Relations Commissioner, Mr Joris de Bres, presented the findings of the research to a conference at Massey University in 2009. He alluded
that the NZ Police website had “information in 11 languages, but not in te reo Maori (Maori language)” (de Bres, 2009, p. 3). de Bres also
stated that language is important to “identity, cultural diversity and intercultural understanding” (p. 1).


Content Analysis
As the research by the HRC was conducted in 2009, the authors of this paper used the framework of content analysis to revisit the topic
and measure Maori content on the NZ Police homepage in 2013.  Numerous definitions of content analysis exist. Broadly speaking,
content analysis is a research method for “making inferences by systematically and objectively identifying specified characteristics” (Stone, Dunphy, Smith & Ogilivie, 1996). Cole (1998) posits that it is a process of “analysing written, verbal or visual communication
messages” (p 53). This research method can be implemented quantitatively by determining frequency, or qualitatively by identifying
themes or concepts (Kulatanga, Amaratunga & Haigh, 2007). The most recent version of the NZ Police website went online in July 2013
(NZ Police, 2013). The NZ Police homepage was captured on 25 August 2013 and forms the basis of this research.

The analysis of the homepage identified nil use of Maori language except for the small logo in the top left corner which contains the Maori translation of NZ Police, Nga Pirihimana o Aotearoa; and street and place names of current incidents under the ‘News centre’ section.  At the foot of the homepage are options for 12 languages (including English); there is no option to select Maori language. Maori imagery on
the homepage is absent. 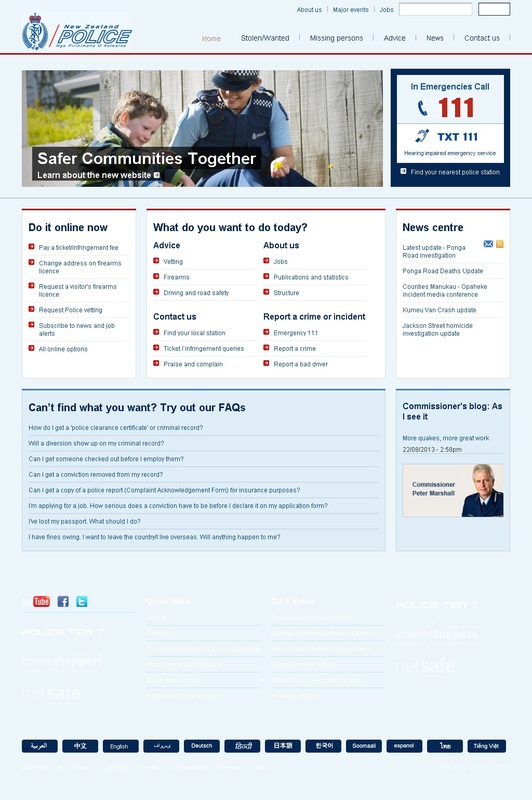 Apart from the small photograph of the Commissioner in the lower right area, the only other photograph is an image of a uniformed police
officer who appears to be female because of the facial structure and long strands of hair above her left ear, together with what appears to
be a Pakeha (the Maori term for Caucasian) male child with pale skin tone. The Pakeha child is depicted smiling and happy. The ethnicity of
the female police officer cannot be determined from the photograph because her face is partially obscured. The NZ Police homepage as it
was on 29 July 2009 (the month of the findings released by the HRC) was retrieved in order to undertake a comparative analysis between
the NZ Police homepage of 2009 and 2013. The 2009 homepage listed the following language options (in order) as designated by the NZ Police: Arabic, Chinese, English, Farsi, German, Hindi, Japanese, Korean, Somali, Spanish, Thai and Vietnamese; they are the same
language options used at present.

Discussion
Despite criticism of the NZ Police website by the Race Relations Commissioner in 2009, this research has identified that the NZ Police
have not amended their homepage to include Maori language and imagery. The Maori language is unique to, and is the official language of New Zealand (Romaine, 2002). It has already been mentioned that Maori comprise one in seven New Zealanders (Statistics New Zealand,
2012) and 40% of Maori are able to understand or read the Maori language (Te Puni Kokiri, 2011). Further, Maori are overrepresented as victims of crime (Quince, 2007). From a police management perspective, the NZ Police should be incorporating Maori language and imagery on their homepage in order to build rapport and engage with Maori communities which is important given that Maori are a key
public (victims, offenders, and members of the wider communities).

The government has an obligation under the Treaty of Waitangi to protect the Maori language (Ministry of Social Development, 2010). As
a government agency, the Treaty of Waitangi obligations extend to the NZ Police. The NZ Police (2013) recruitment website briefly mentions this under the sub-heading ‘Commitment to Maori and Treaty’, “NZ Police has a commitment to the Treaty of Waitangi principles and as such, are responsive to Maori needs and aspirations”. One of the key principles of the Treaty of Waitangi is partnership which refers
to the relationship between the Crown and Maori (Waitangi Tribunal, 1999). The principle of partnership is not visualised on the NZ Police
homepage. Rather the absence of Maori content represents a recurrent theme of power relations that is permeated through governmental
discourse. Given that structural discrimination against Maori exists throughout the justice system (Human Rights Commission, 2012),
the absence of Maori content on the NZ Police homepage could be perceived as hegemonic discourse to further marginalise Maori.
Others may view it as indolence on behalf of the NZ Police.

The nonexistence of Maori language while 12 other languages are present on the homepage is indecorous and contributes to social
polarisation. Further, the usage of a photograph that depicts a happy Pakeha child and a female officer of unknown ethnicity without Maori
presence is unscrupulous especially when a click on the link from the homepage to the Stolen/Wanted (Wanted to Arrest) page is  dominated by Maori faces. It aligns with a Foucauldian perspective of power relations; in this case Pakeha realities are privileged over Maori realities and is typical of the monocultural dominance of Pakeha that is also portrayed in the mainstream media.

For example, Pakeha are depicted in mainstream media as active, independent, competent and caring; while Maori are stigmatised as
being apathetic, deviant, neglectful and reliant on mainstream support (Groot, 2006). Cultural feminism theorists may also have concerns with the photograph of the male Pakeha child with the female police officer given that her face is partially obscured while the other two persons on the homepage (male child and male Commissioner) have full facial visibility. The cultural feminism framework focuses on “shared power” rather than “power over” (Holvino, 2007).

References can be viewed in the PDF version.