﻿NOTE:﻿ The NZ Herald printed a story about the concerns raised in this article.  As a result of this article, Google amended the Autocomplete function.  Read the first and second news articles in NZ Herald.

The  world  has  become  more  interconnected  which  has changed the way we communicate (Steinfeldt et al., 2010). As technology  has  continually  developed  allowing  instant  online publication, an increasing abundance of opinionated discourse has  appeared  on  the  worldwide  web  (Chelaru,  Altingovde, Siersdorfer  &  Nejdl,  2012).   From  blogs  that  disseminate political  ideologies,  to  hair  and makeup  tutorials,  the  internet has become a medium that facilitates unfiltered instantaneous communication  to  a  potentially  global  audience.   While  most users  of  internet  services  utilise  the  technology  to  engage  in civilised  dialogue,  it  does  not  require  much  effort  to  locate capricious behaviour in the anonymised online environment. For  example,  online  forums  have  been  used  to  promulgate racist  literature  and  imagery  (Steinfeldt  et  al.,  2010)  which  is demonstrated  in  the  New  Zealand  context  on  multiple  online forums  whereby  racist  remarks  against  Maori  and  other  nonPakeha  ethnic  groups  are  posted  on  a  regular  basis.   The
forums are hosted on servers located both in New Zealand and overseas.   An  observation  of  user  data  from  such  forums reveals  that  those  responsible  for  the  indecorous  online attacks  against  Maori  are  perpetuated  by  the  philistines  of Pakeha  society;  those  who  indoctrinate  the  notion  of  ‘Maori privilege’  and  cast  blame  on  Maori  for  their  own  lack  of success  in  the  Pakeha  world.   This  is  evidenced  by  accessing other  postings  by  the  users,  cross  checking  of  pseudonyms and  usernames  with  other  web  services  and  analysing  the content  on  their  social  networking  accounts,  among  other methods.   This  profusion  of  online  putridity  has  impacted
upon  internet  search  engines  by  manipulating  the  predictive text  capabilities  that  exist  in  many  of  the  search  engine interfaces. This paper highlights the issue surrounding racist suggestions within Google’s Autocomplete function.

Internet  search  engines  such  as  Google  and  Yahoo,  are essentially  searchable  databases  of  websites  and  online content which are collated by web crawlers, a type of software, that  systematically  browse  the  worldwide  web  following hyperlinks  from  one  page  to  another  (Taylor,  2010).   Search engines “represent the beating heart of the web” (Taylor, 2010, p.  16)  and  influence  much  of  what  information  is  viewed online  by  recommending  websites  to  be  visited.   In  online reality,  search  engines  are  the  gateway  to  public  information and  control  to  a  large  degree  what  content  will  be  viewed  by users,  and  what  content  will  be  inaccessible.   According  to Azzopardi  and  Owens  (2009),  the  order  in  which  websites  are recommended  by  search  engines  “dictate  to  a  large  extent,  if not  completely,  what  information  is  accessed  during  a  user’s online experience” (p. 1). Furthermore, search usage provides the search engine companies with valuable data which enables them to determine “who searches for what, along with several characteristics  about  each  user  (location,  time,  device,  etc.)” (Mazieres  &  Huron,  2013,  p.  244).   The  world’s  most  popular search  engine  is  Google  (Mazieres  &  Huron,  2013)  which receives 17 billion queries per month from users in the United States alone (Hannak et al., 2013).

As  the  internet  is  continually  evolving  with  innovative features,  search  engines  are  also  developing  (M.  L.  Smith, 2013).   A  tool  that  Google  has  incorporated  into  their  search engine  interface  is  called  Autocomplete.   Autocomplete  is essentially  a  mechanism  that  offers  search  suggestions  to users  as  text  is  entered  into  the  search  box  (Ward,  Hahn  & Feist,  2012).   Other  applications  also  utilise  this  technology due  to  the  convenience  of  use,  such  as  command  shells, mobile  applications,  desktop  computer  search  and  software development  environments  (Xiao,  2013).   Google  (2014) explains Autocomplete on their support page:

"As  you  type  within  the  search  box  on  Google, Autocomplete helps you find information quickly by displaying searches  that  might  be  similar  to  the  one  you're  typing.  For example,  as  you  start  to  type  “new  york”,  you  may  be  able  to pick searches for other New York-related search queries"  (para. 1).

The  Autocomplete  tool  has  obvious  advantages  for  users which  Google  (2014)  emphasises  such  as  allowing  the  user  to type  less,  finding  information  quicker,  and  discovering  other relevant information, among others. However, the crux of this paper  is  to  present  how  Maori  are  portrayed  in  Google’s Autocomplete  feature.   Firstly,  it  is  important  to  note  that according  to  Google  (2014)  “search  queries  that  you  see  as part  of  Autocomplete  are  a  reflection  of  the  search  activity  of users and the content of web pages indexed by Google” (para. 3).   As  such  the  following  captures  are  representative  at  the time  of  authoring  this  paper.   The  web  browser  used  for  this research  was  Internet  Explorer  and  the  searches  were conducted  in  New  Zealand.   However,  associates  in  overseas
countries  also  undertook  the  same  search  queries  which concluded identical Autocomplete results as described below.

Several  keywords  relating  to  Maori  were  entered  into  the Google  search  engine.   Below  are  the  search  queries  and  the
Google Autocomplete suggestions.

1.  The  text  “maori  are”  followed  by  the  space  key  were inputted  into  Google  search  and  the  following  suggestions
were returned: 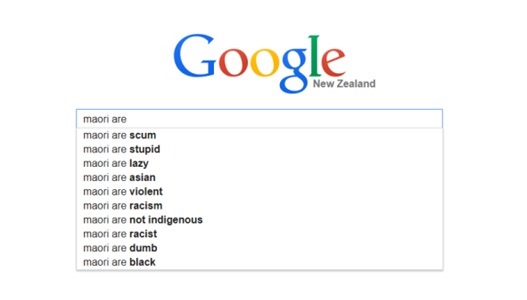 2.  The  text  “why  are  maori”  followed  by  the  space  key were  inputted  into  Google  search  and  the  following suggestions were returned: 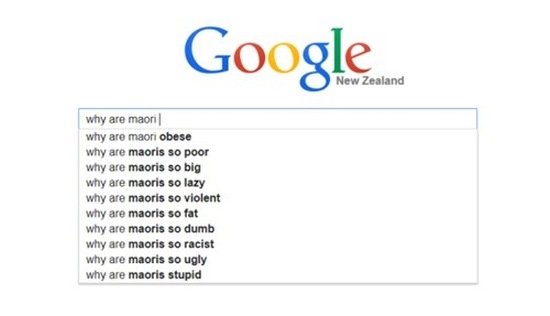 Other  variations  of  suggestions  relating  to  “Maori”  in Google  Autocomplete  will  most  likely  incur  similar  outcomes.  As mentioned above, Google (2014)  stipulated that the results of Autocomplete are driven by the search activity of their users and indexed websites. If that statement is to be taken as fact regarding  the  Autocomplete  taxonomy,  it  questions  the morality  and  the  mental  wellbeing  of  a  sector  of  society  who input drivel into the Google search engine and publish or post hateful anti-Maori sentiment online.

The  stereotyping  and  misrepresentation  of  Maori  is  not  a recent  phenomenon  as  research  since  the  1950s  has  reliably determined that Pakeha  hold unfavourable views of  Maori, for example  “Maori  have  been  viewed  as  trouble-makers,  lazy, unintelligent,  dirty,  aggressive,  easygoing  and  friendly, whereas  Pakeha  have  been  regarded  as  successful, hardworking, intelligent and self-centred” (Holmes, Murachver &  Bayard,  2001,  p.  79).  As  expressing  overt  racist  views  have become  socially  unacceptable,  other  strategies  to  convey racism  has  permeated.   For  example,  the  supercilious discursive  pattern  that  usually  begins  with  “I’m  not  racist
but…” or “my best friend is brown” suggests that what follows cannot be racist but usually is (M. S. Smith, 2008). While van Dijk  (1992)  posited  that  another  artifice  to  camouflage  racist connotations  is  to  redefine  racism  altogether  and  also  to  use the  “we  are  not  the  racists,  they  are  the  real  racists”  line, which  is  seen  repetitively  in  the  comments  sections  of  New Zealand’s online news services and similarly the popular blogs aligned to the right of the political spectrum. The development of the internet has allowed racism to transition into the online environment  where  racist  rhetoric  can  now  be  overtly expressed  incognito  rather  than  using  subtle  and  indirect  forms of racist discourse. The racist search queries and online postings  have  influenced  Google’s  Autocomplete  which  has resulted  in  the  above  suggestions  when  searching  for  Maori. Some  other  ethnic  groups  are  experiencing  similar  outcomes, while  other  groups  such  as  Pakeha,  are  not  victims  of  racism in Google’s Autocomplete.

A  comparison  search  of  some  ethnicities  was  undertaken in  Google  search  to  determine  if  Autocomplete  would  offer similar  suggestions.   For  example,  Pakeha,  Caucasians, Whites,  White  people,  Jews,  African  Americans,  and  even explicit  derogatory  terms  such  as  Nigger,  Niggers  etc.  were typed  into  Google  search.   All  of  the  aforementioned  did  not generate  any  racist  suggestions  when  entered  into  Google search.   In  fact,  most  received  no  suggestions  whatsoever. However,  Australian  Aboriginals  (under  the  search  term “Aborigines” and “Abos”) and some Pacific Island ethnic groups suffered  similar  outcomes  to  Maori.   While  the  author  did not input  every  single  ethnic  group  into  Google  to  query  the Autocomplete  suggestions;  it  is  manifestly  evident  that  racial hatred towards Maori is perpetuated in Google’s Autocomplete predictive text function. What further aggravates the matter is that  Google  (2014)  have  stated  that  Autocomplete  cannot  be disabled  within  a  user’s  browser;  although  Google  has blacklisted  certain  words  within  Autocomplete  queries  (M.  L. Smith, 2013) which may elucidate why some ethnic groups are not subject to the same attacks as Maori.

It  is  fair  to  conclude  that  the  idiosyncratic  nature  of Google’s  Autocomplete  is  currently  facilitating  racism  against Maori by permitting racist suggestions as demonstrated above, which  is  a  direct  result  of  racism  in  the  online  environment. The  same  situation  exists  for  our  Australian  Indigenous counterparts  and  some  Pacific  Island  groups.   This  matter needs  to  be  addressed  and  the  appropriate  steps  taken  by Google.

References can be viewed in the PDF version.